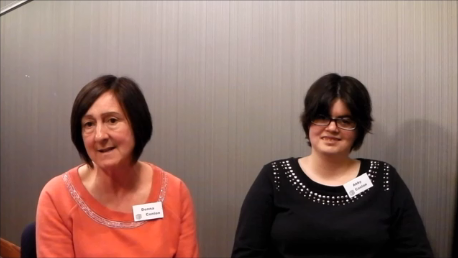 Parents discuss their experiences of receiving a diagnosis

latest news
Key Fact
Diagnosis of Cornelia de Lange syndrome is largely based on clinical features, although genetic tests may be also be used.

Because the genetic causes of Cornelia de Lange syndrome have only recently begun to be understood, most diagnoses are made based on the clinical features of the syndrome. Clinical features include distinctive facial and other physical characteristics associated with the syndrome.

The signs of Cornelia de Lange syndrome can vary between individuals and are sometimes referred to as ‘Classic’, ‘Mild’ and ‘Atypical’ forms.  There may be differences in the genetic mechanism underlying these different subtypes. However, this is not yet completely understood. To read more about the genetics of Cornelia de Lange syndrome, click here.

Sebastian is 12 years old and has Cornelia de Lange syndrome His favourite animals are pigs He likes collecting shiny...

Edward was diagnosed with Cornelia de Lange Syndrome when he was 5 months old. Here, Rachel describes the process of getting a diagnosis for Edward

“When he was born, up until he was 5 months old we knew something wasn’t quite right but didn’t know what it was. When he was born we saw he had a continuous line across the palm of his hand. The paediatrician picked up on that and because he’d had other problems as well they sent off blood cultures for analysis within hours of him being born. We then got the results after a week that there were no abnormalities detected, and we were told he was just having a few problems. I then kept going back to the paediatrician during those first few months because something wasn’t right, he was choking and vomiting, and his growth wasn’t right. He was referred to a geneticist as the paediatrician suspected that he had Noonan syndrome. When we went to see the geneticist, the geneticist was quite definite that he didn’t have Noonan syndrome but had Cornelia de Lange Syndrome, which didn’t really register as we didn’t know anything about Cornelia de Lange syndrome, and the only thing he was able to tell us was that Ed might not be able to walk or talk. It was horrendous, the whole of the world just fell from beneath us, I think we were just totally, totally shocked, and devastated and we were taken into another room and we just sobbed and sobbed, and didn’t quite know where to put ourselves.

Once we had a name for the syndrome, my mum was on the internet getting lots of information. She got in contact with the Cornelia de Lange syndrome foundation and they sent a brochure and a DVD, and it sat on my shelf for a very very long time. I knew it was there, but I wasn’t ready to go there. To be honest, Ed was such a handful, I didn’t have the brain space to be able to care for Ed and also take on this syndrome. At the time, the syndrome didn’t matter because I was still too busy looking after Ed making sure he wasn’t choking or being sick and all his other complications, so the syndrome was secondary really. At some stage I decided I wanted to watch the DVD, I stopped and started it as I found it quite a hard thing to watch. But I did it in my time when I was ready to do it. So it was a great, great benefit knowing that information was there and knowing I could tackle it when I was ready to".

Rachel describes what has helped her come to terms with Ed’s diagnosis.

"I think the old cliché that with time, it does get easier. I think the most important thing for us since Ed’s diagnosis has been the support of the Cornelia de Lange syndrome Foundation, it’s been massive. The one thing that keeps me going when I think about Edand his syndrome, comes from what another parent once told me. When I asked him ‘Does this pain ever stop?‘ He said ‘No, it doesn’t stop, it just changes: each milestone your child achieves, you are thankful that they have actually got to that milestone’. But equally there are times when you can’t help yourself but look at their peers, and look at what they are doing and think, at the age of 20 they are off to University or whatever, and you thinking, that’s what my child might have done if they had reached that age if they were a typical child. It reassured me that a parent of an adult with Cornelia de Lange syndrome who has 20 years experience of being within that world has been through the same things as I have, and that makes me think that we will also learn to come to terms and deal with Ed having Cornelia de Lange syndrome".