Children and adults with Cornelia de Lange syndrome are almost always short in stature.  Most individuals with Cornelia de Lange syndrome fall well below the 5th percentile throughout life.  This means below 95% of children of the same age. As young children they can also have below average weight when compared to others their age, although obesity can occur in later life.

Small head size is often characteristic of the syndrome.

The facial characteristics of Cornelia de Lange syndrome are often striking, although subtle features may be present in individuals with the mild form of the syndrome.

Features include: thin arched eyebrows which meet in the middle (synophrys),  thick long eyelashes, a short upturned nose with a broad nasal bridge, thin down-turned lips, low-set ears, small widely spaced teeth, short neck,  a high arched or cleft palate (3 out of 10 individuals) and an undersized jaw (8 out of 10 individuals).

Limb differences may include small hands and feet, the fifth finger may bend inwards towards the fourth finger (clinodactyl), the second toe may be partially joined to the third toe, and the thumb may appear closer to the wrist than is typical (proximally placed thumbs).

Limb abnormalities including missing portions or shortening of limbs; usually fingers, hands or forearms (approximately 3 out of 10 individuals). 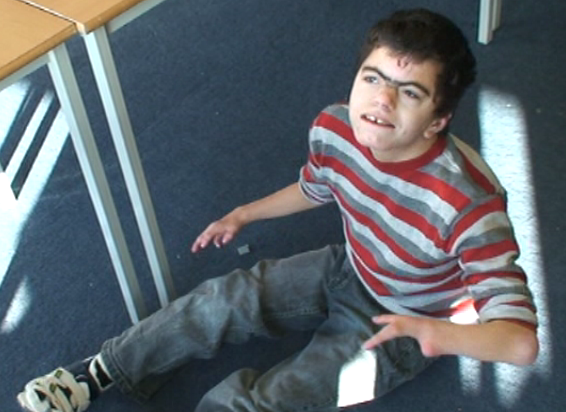 Hirsutism is excessive body hair, particularly on the nape of the neck and lower back.

Hearing loss and visual impairments (typically short sightedness) are common, although many parents report having difficulties keeping hearing aids and glasses on their children!

It is important to be aware that for unknown reasons, some children with Cornelia de Lange syndrome test poorly during hearing exams when they are very young.  They may even be diagnosed as deaf.  However, it is not unusual for parents to report that their child was diagnosed as deaf immediately after birth, moderately hearing impaired about 12 months, and mildly hearing impaired or having no impairments at 18 to 24 months.  This apparent improvement in hearing abilities is unusual and unexplained. Therefore, it is important to communicate with your child, even if initial tests indicate hearing loss.