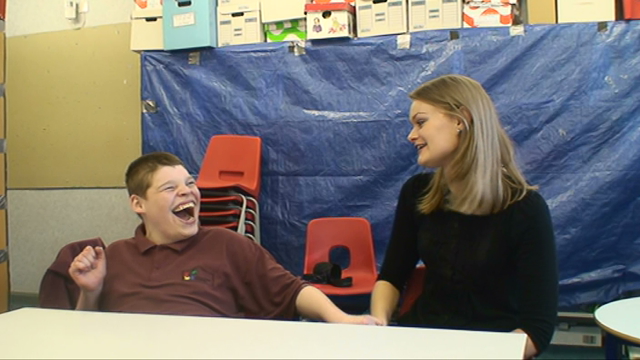 Individuals with Angelman syndrome often have a movement or balance disorder which can be characterised by ataxic gait. This means that individuals often lack coordination whilst performing voluntary movements such as walking and movements can often appear to be 'jerky', clumsy, inaccurate or unstable. Some individuals may walk with their arms raised and their wrists and elbows flexed.

Some individuals with Angelman syndrome may have a tremor of the hands.

Facial characteristics of Angelman syndrome may be subtle but sometimes include a small head (microcephaly), pointed chin, wide jaw, widely spaced teeth, protruding tongue and deep set eyes. Some of these facial characteristics may become more pronounced as the person gets older.

Sometimes there can be a lack of colour in the skin (hypopigmentation) and individuals may have blonde hair and blue eyes even when no one else in the family does. Hypopigmentation is more common in those individuals who have the deletion subtype of the syndrome.

An EEG is a graphical record of electrical activity of the brain produced by a technique called electroencephalography. ​Individuals with Angelman syndrome tend to have a distinctive EEG pattern when an EEG is conducted.