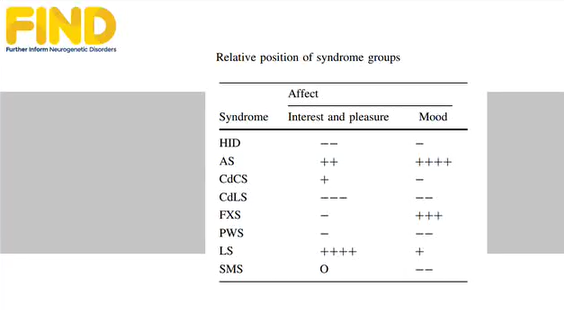 Click here to see how mood, interest and pleasure in Cornelia de Lange syndrome compare to other genetic syndromes

The researchers looked at the factors that were predictive of low mood in Cornelia de Lange syndrome.  They found that insistence on sameness and Autism Spectrum Disorder characteristics, as well as older age, predicted low mood scores over time.  This fits with previous research that has show that changes in routine or unpredictable environments lead to low interest in activities and low mood.  Later adolescence may be a particularly difficult time because of the changes that occur during this period to people’s routines, such as leaving school.

Health difficulties have been linked to low mood in people with intellectual disability so these should be monitored regularly in Cornelia de Lange syndrome.