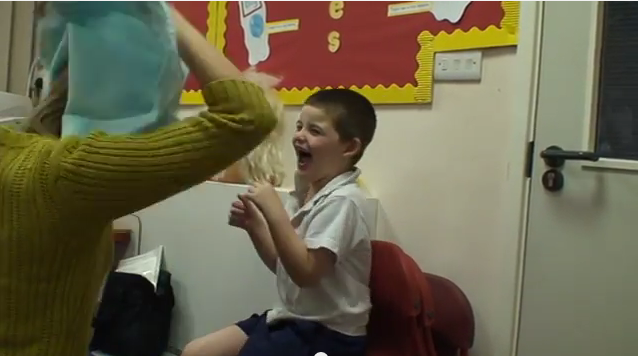 Social interaction in Angelman syndrome differs from that seen in ASD.  In this clip you will see Daniel playing with Penny.

latest news
Key Fact
It is important to take into account an individual's level of intellectual disability when looking at autistic characteristics.

The core characteristics of Autism Spectrum Disorder (ASD) include the following:

It is very important to remember that the characteristics of Autism Spectrum Disorder can sometimes look very similar to those identified in individuals with severe and profound levels of intellectual disability.  This means that it is very important to take the person's level of intellectual disability into consideration when thinking about a diagnosis of ASD.  This is particularly important for young children with Angelman syndrome where it may become even more difficult to accurately assess the presence characteristics associated with autism.

A recent systematic review and meta-analysis by Richards, Jones, Groves, Moss & Oliver (2015) reported prevalence of ASD phenomenology in 34% of individuals with AS (and significantly more likely in AS than in the general population).

One recent study found that individuals with Angelman syndrome demonstrated greater skills than individuals with ASD in particular areas including social smile, facial expression directed to others, response to name, shared enjoyment and unusual interests and repetitive behaviour.  These skills are less reliant upon the person having achieved a particular developmental level than other diagnostic characteristics of ASD.

Repetitive behaviour occurs much less frequently and shows a very different profile in people with Angelman syndrome in comparison to people with ASD.

Individuals with Angelman syndrome are often very sociable and have a happy and excitable personality.  Sudden outbursts of laughter were reported by Dr Angelman in 1965 in his initial descriptions of the children.  To read more about sociability in Angelman syndrome click here.